For Bob Draheim, owner of Busy Bee Honey Farm in Cannon Falls, MN, bees began as a accessory to his farm in Byron, MN about 20 years ago. “We had a pick-your-own strawberry, pick-your-own raspberry farm… We needed the bees to pollinate raspberries, so I bought two hives of bees,” Bob recalls, “We had such a good raspberry crop that one year, the second year we started with the bees, and we were like, “God, we got to get more bees!”

Eventually Bob sold the berry farm to move closer for his job as a rural mail carrier in Apple Valley. “I had a couple times in January that I couldn’t make it up County Road 5, south of Pine Island. I got stuck and I said nope, this is enough. So we sold the place and moved up here,” Bob remembers. “Got out of the raspberry, strawberry business. Kept the bee business.” He has been cultivating these little pollinators ever since. 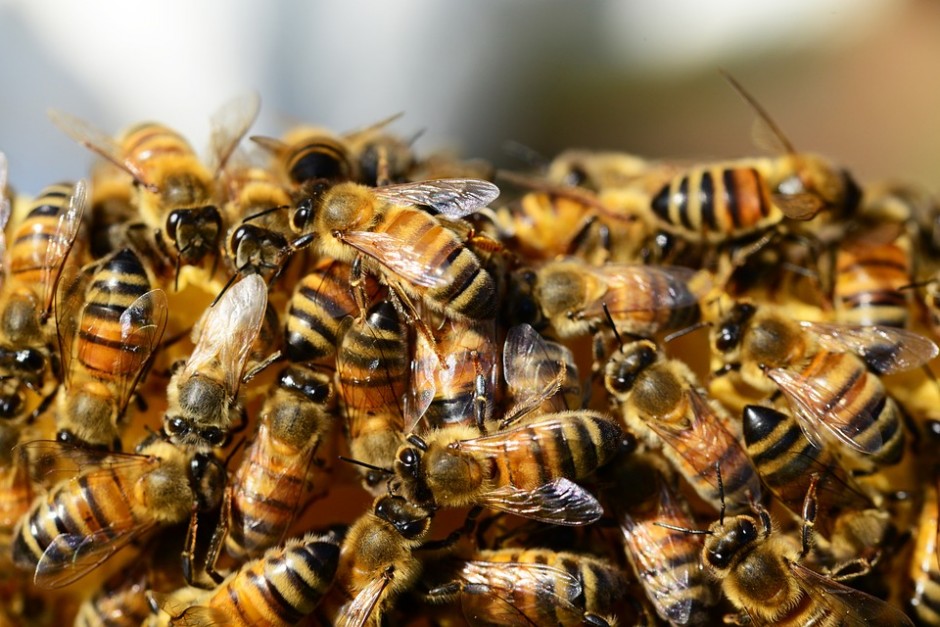 Growing up on a farm in Olivia, MN, Bob saw some kind of farming in his future, but bees came as a surprise. “If you would have asked me 30 years ago if I was going to get into bees I would have said “yeah right, I don’t think so.” But I enjoy it,” Bob acknowledges. “You get out, you get fresh air and you get exercise. And I eat good with the honey.”

Bob currently manages 95-100 hives for Busy Bee Honey with colonies scattered around a variety of properties in southeastern Minnesota. Most of his hives provide customers, like Pepin Heights Orchard, with pollinators for their crops. While that may sound like a lot of hives to someone with one or two in their yard, Bob insists he has a small beekeeping operation, but he likes it that way. “I am about where I want to be, about 100 hives. I could take care of a lot more, but I want to do other stuff in the summer too,” notes Bob.

He takes his raw honey to farmers markets, threshing shows, and festivals, selling jars that range from two gallons down to two ounces, as well as beeswax candles and honey sticks. His specialty is flavored whipped honeys. “Whipped honey is thick like peanut butter and jam so you put that on your toast in the morning and it just sits there,” Bob explains.

Bob makes his honey sticks, small plastic tubes filled with rich flavored and unflavored honey, with a machine at his home. Root beer and pink lemonade are the top sellers, but he offers everything from plain clover (honey harvested when the bees were pollinating clover fields) to black licorice, colored the shade of fresh black top. “I got 38– 40 different flavors of honey sticks,” Bob laughs, shaking his head. “Too many.”

But new flavors keep coming as he continues to be peppered with suggestions from customers. The current request in the works? A coconut flavored whipped honey. 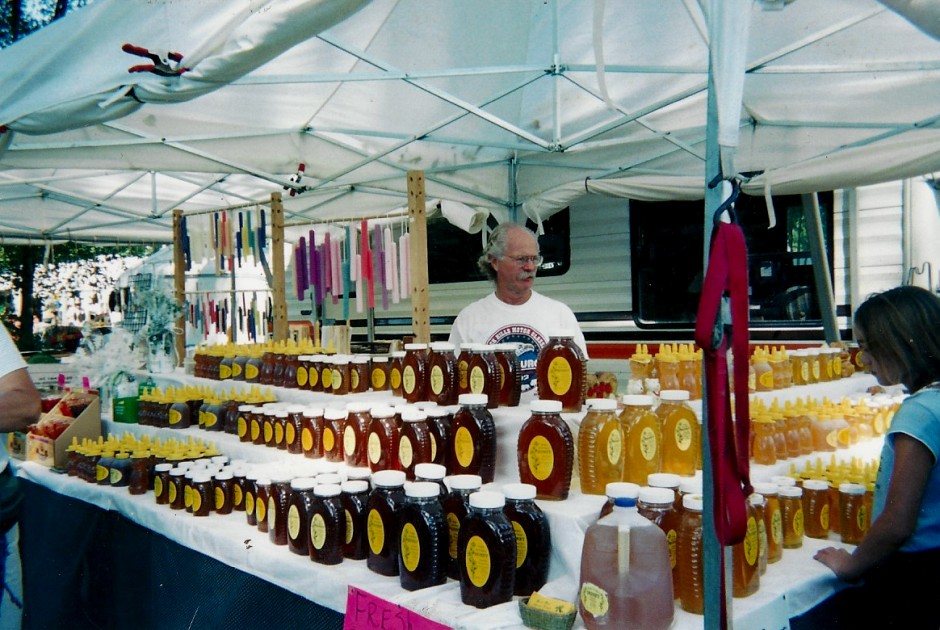 Bob Draheim at his booth, selling his honey, honey stix, and candles.

And while winter is perfect for prototyping new flavors, the start of warm weather means it is time to get the hives and equipment prepped for spring. Bob scrapes the hard wax off last year’s frames before it turns sticky in the heat. He travels out to each hive and peels off the tarpaper, which he had carefully wrapped each colony in last fall to protect them from the winter winds, and checks to see that the bees inside are alive and well.

In contrast to common sense, one of the best signs that a hive has survived the winter is dead bees scattered at its opening. This means the worker bees are continuing to remove the bodies of their deceased colleagues. “I just have to go out when I can drive to places, through the fields, and check to see if they are still alive or not. If you see dead bees out front then you know they are alive,” says Bob. “So then I got to see if they need any feed or see if they need any honey. I will feed them honey and what they call pollen patties.”

Sadly, last year less than half of Bob’s hives had this welcome sign of spring-cleaning outside their front door. Alongside beekeepers across the country, colony die-off has struck Busy Bee Honey hard in recent years.

“I lost about 55% last year because we’ve got two parasitic mites and we’ve got the pesticides and the herbicides and lack of nectar and the GMO stuff and so it is all this stuff thrown together,” Bob sighs.

Not only are the hives dying, but honey production is not what it used to be. When asked how much honey he harvests per hive, Bob resigned “Not enough. Not enough.”

“It averages about 46 lbs of honey per hive. We used to get 80 lbs per hive, like 20 years ago, before all the pesticides and the herbicides. There are pictures I have seen in some of the bee magazines where these guys back in the 1920s or the 1930s would get 300-400 lbs of honey per hive, but that was back when all the farmers had alfalfa and they didn’t have any pesticides. There are pictures of supers that they have piled up like 10 feet tall, but we will never see those days any more,” Bob admits.

Nowadays the surrounding farm fields are endless acres of corn and soybeans and the few remaining fields of alfalfa are cut at the first sign of a blossom in order to keep the tender, nutritional qualities of the plant that is so desirable for livestock owners. But if bees are known for anything, it is their work ethic and each year, as the first maples begin blossoming in the spring, they renew their constant commute for nectar and pollen. After the maples comes the dandelions, a crucial spring food source for the hive. 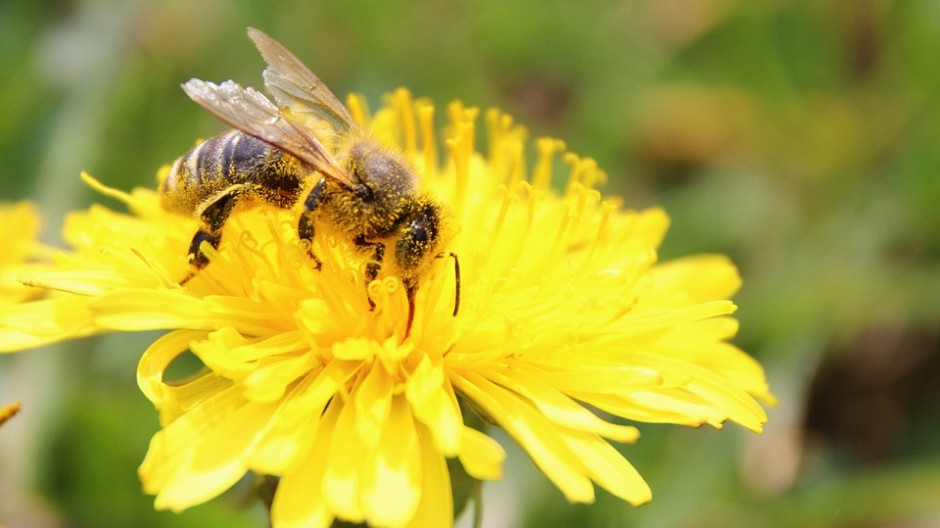 “You can watch them when they are coming into the hive when they got a lot of really really bright yellow pollen, like when the dandelions are blossoming and you are like “wow, they are really out there working,” and they just go back and forth all day long. They don’t get a lunch break or nothing,” Bob admires.

They will keep this going through the summer and into the fall, while Bob continually tops each hive with supers, boxes filled with empty frames where the bees build honey comb and store their honey. Mid-August, Bob collects these supers and brings them home to extract the bee’s golden harvest.

“You take the frames out and you cut the wax off of both sides with an electric knife and you put these frames in like a centrifuge and the centrifuge spins the honey out of the frames. And then you just strain it and put it into bottles. I strain the big chunks out of it. It is not heated so that I have what they call raw, unprocessed honey,” states Bob. “If you heat honey too much, if you heat it over 160 degrees, all the good enzymes and all the good stuff is taken out of it. That’s why when you see the honey in Cub Foods or in the grocery stores, there is no pollen grains or nothing in it and you wonder “well, it don’t taste very good,” which it true.”

Bob’s commitment to his winged workers and the rich honey they create keeps customers coming back year after year for a honey that tastes like honey. This year, as the maple blossoms begin to open around Busy Bee Honey’s hives, Bob is ready for the next season, with all its rewards and challenges.

“I will probably retire someday, but not as long as I can do it. And the bee stings are good for you,” Bob smiles. “I don’t have any problems with arthritis because of bee stings.” 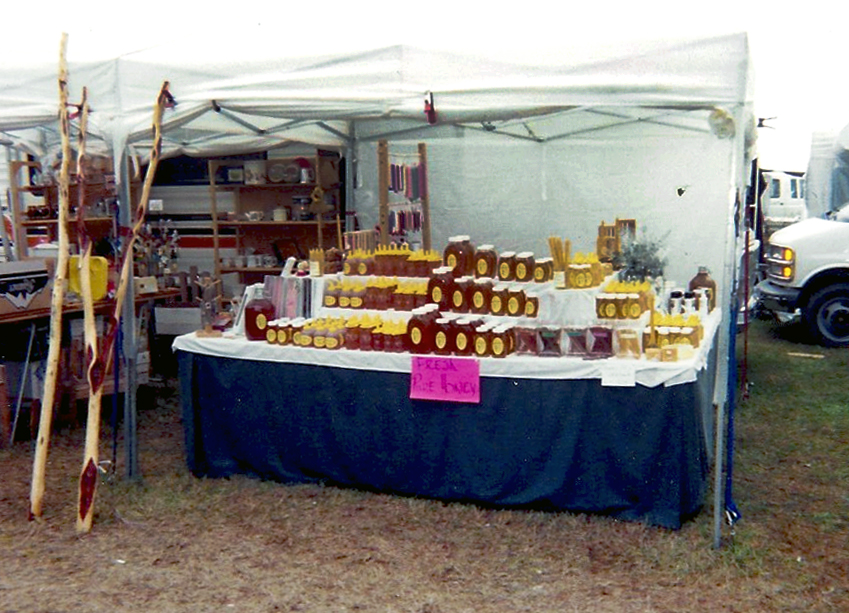