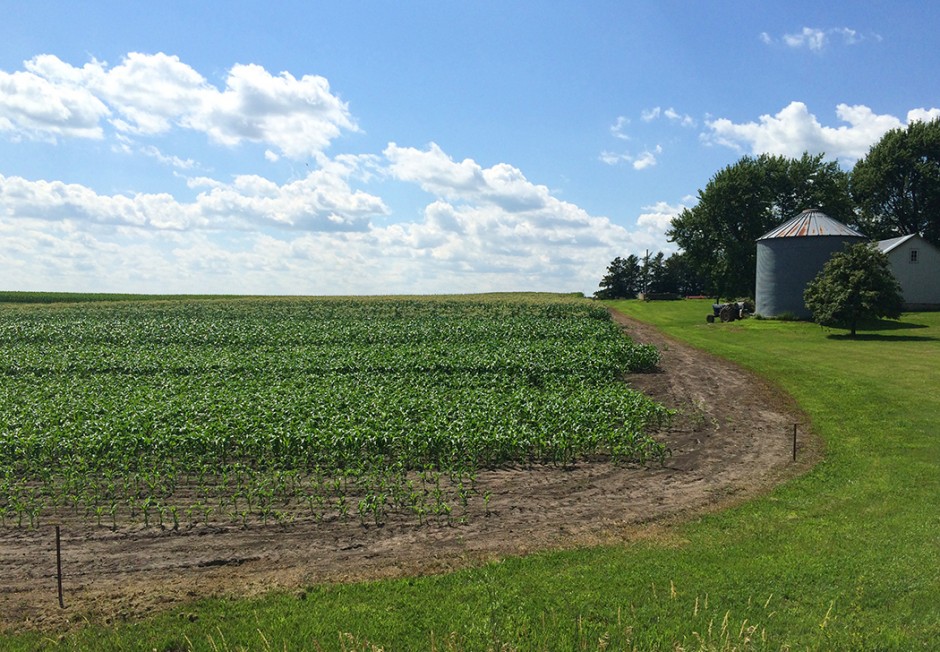 The staggered plantings rise up to the horizon. The shortest row is Steve’s hopes to extend the sweet corn season. It will mature right as the cold weather hits, but, if the temperatures agree, it will mean a couple more days of sweet corn for Josephson’s customers.

In the field neighboring Steve and Sue Josephson’s house, rows of sweet corn rise in steps away from the bordering county road. The closest stalks are no higher than mid-calf while the far rows have bulging ears that will be harvested in two days time.

“Each planting lasts 5 to 7 days and then we move to a new planting,” explains Steve. This staggered planting of their five different sweet corn varieties keeps the corn supply steady from mid-July until the first frost. Each variety matures at a different time, allowing them to make the most of the sweet corn season. 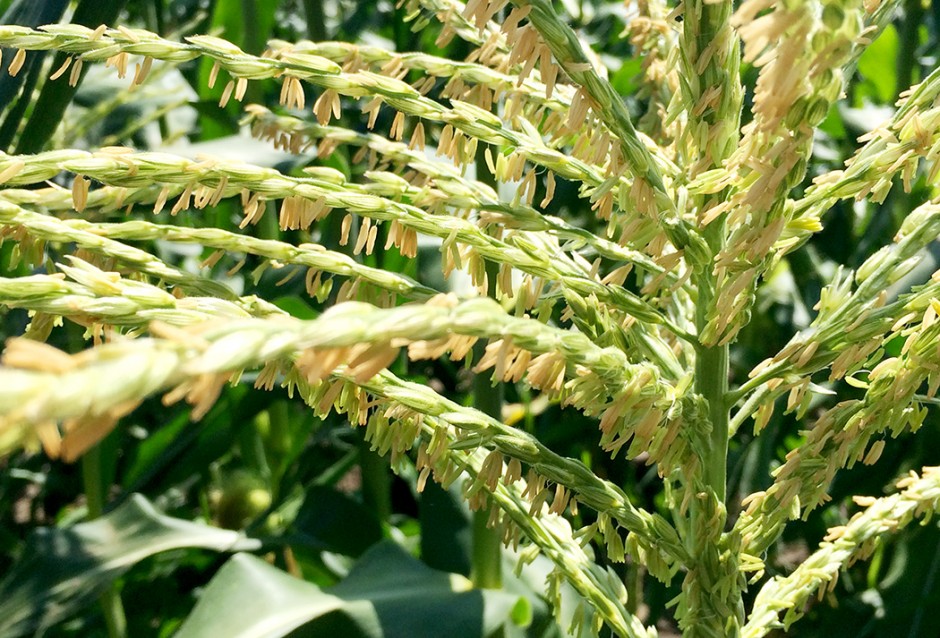 Pollen sheds from the tassels of this sweet corn stalk.

Steve runs his fingers through the tassels of a nearby stalk and notes the shedding pollen. Shedding pollen means that this row’s ears are about three weeks away from being enjoyed – boiled, grilled, or simply fresh off the cob. Each morning, Steve and his young summer employees pluck ears of corn from the thick green stalks. Before placing it into the back of Steve’s maroon pickup, each ear goes through preliminary inspection for ripeness and damage from worms or raccoons. The latter is a particular nuisance when it comes to sweet corn.

“They know when it is ready too!” exclaims Sue. “You can be out there and say, ‘Oh it should be ready in two days’ and there are no raccoons and all of the sudden you go out there and they’re there the first day it’s ready!”

We all step carefully over the low electric wire that runs around the parameter of the field. It helps deter the furry thieves, but sometimes the juicy cobs are too much to resist.

“The worst thing about raccoons is they’ll take a bite out of an ear and then go to the next ear and take a bite,” says Steve, shaking his head. “You pick it and everything is fine except for this one spot where they ruin it. I wouldn’t mind feeding them if they would take down an ear and peel it and eat it and go home.”

Raccoons are not the only ones who can’t get enough of the Josephson’s Sweet Corn. Their truck has a strong human following from the Twin Cities down to Rochester. Each day you can find their sweet corn at the Cannon Falls City Parking Lot and at Ferndale Market.

“We have been encouraged to go to other towns, but the work, you know? This is adequate for us,” Sue agrees. 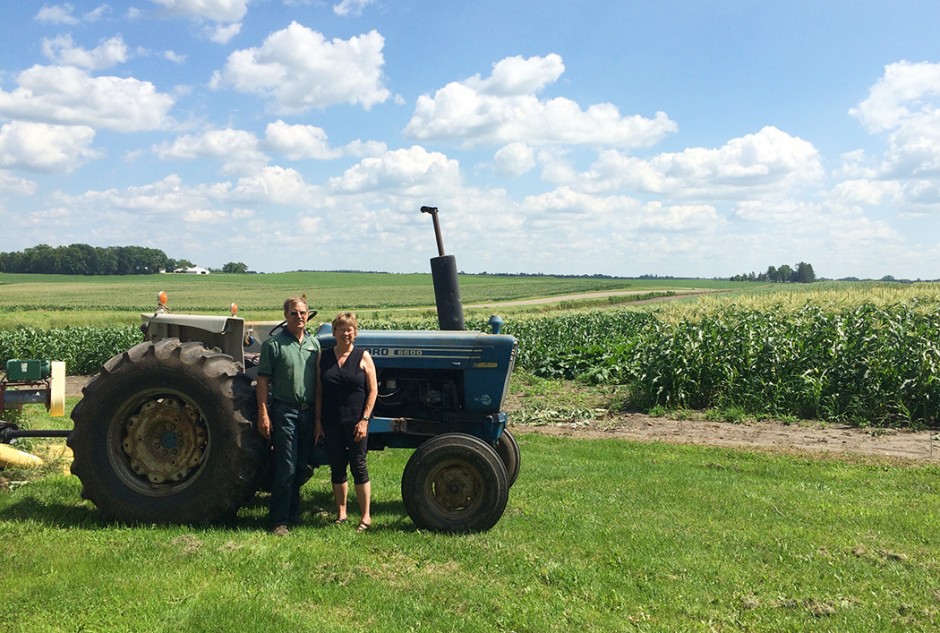 Steve and Sue Josephson standing next to their sweet corn field. They moved to this farm in 1983.

The Josephson’s moved to just outside of Cannon Falls, MN in 1983, but farming is in their blood. “We were both raised as farm people,” states Steve. Before purchasing their farm, Steve taught Vocational Agriculture in southern MN and Sue was a registered hospice/home care nurse. After teaching for 8 years, Steve decided he wanted to farm full time so they began looking for a farm of their own. One day they passed an auction sign next to a lovely property on the side of county road 24. The property was being sold in three parts: two parcels of land and the house and buildings.

“They sold the house first and it went higher than we could afford. We knew we couldn’t buy the whole farm, but the price of the house went up too high so we passed it up,” remembers Sue. “Then we thought it was all over with and somebody came back and said, ‘Get up there! Get up there! You’re back in the game!’”

At the end of the auction the property was put up in its entirety. If you outbid the combined offer of the three individual buyers, the farm was yours. “We got together with one person that had bought one piece of the land… The other people who bought the other part tried doing the same thing, but they didn’t work together. The guy with the third parcel was willing to work with us and we got it! And that is why it is emotional,” Sue says, smiling. “This is how I view the gavel,” she laughs, stretching her arms wide, “…in my mind it was so big. And we had it! We had half the farm AND the house!”

In the beginning the Josephsons raised pigs and feed corn. About 20 years ago they added sweet corn to their fields. The hogs were sold off about ten years ago and, technically, the Josephson’s are now retired.

“I am retired in the winter time, but not in the summer time,” laughs Steve. They continue to raise 70 acres of feed corn and soybeans and 11 acres of sweet corn.

“I think the sweet corn energizes him,” jokes Sue. “He had a stroke 5 years ago, which, at the time, we weren’t ever sure if he was ever going to farm again. In fact, it was April, our kids were saying, ‘Don’t finish, forget the sweet corn.’ The neighbors came and planted the rest and thank goodness because by fall, with a lot of intensive therapy, he was feeling not 100%, but able to do it with a little more help.”

“I enjoy raising sweet corn and pumpkins and squash. I sit down in the wintertime and think of ways of trying to make it better. I enjoy planting it. I enjoy looking at it. I enjoy harvesting it. I enjoy selling it,” smiles Steve. 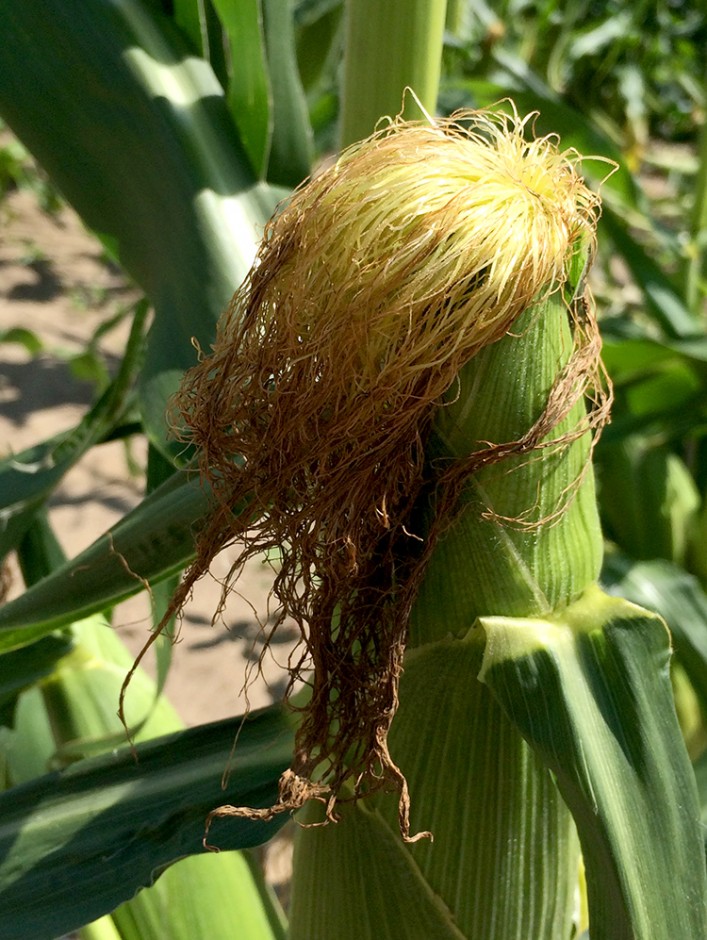 This sweet corn ear swells with ripe kernels. The Josephson’s pick their corn every morning to make sure every cob that sells that day is at its utmost freshness.

In the beginning Steve and Sue’s children helped pick corn and sell cobs from their truck in Cannon Falls, but as they grew up, the Josephson’s hired neighbor children to help with the sweet corn. “We have had such opportunity to teach kids. We saw one last summer and he has got to be what now, 35? And he said, ‘…I still use what you taught me selling corn. I still use that with my customers. The first thing I say is ‘hello, how are you?’, make eye contact.,’” reminisces Sue. “I think that part of our mission has felt really good.“

When the truck rolls into the farm at the end of each sales day, Steve sweeps out what is left in the truck and mows down the row they picked from that morning. “I pick one row at a time and that afternoon then I will chop that row. It had that one chance,” states Steve. “Every ear we sell that day has been picked that day. Nothing gets held over….when I deliver corn I take away whatever hasn’t sold.”

Freshness is key, but the Josephson’s have spent years whittling their 5 varieties down to the best that sweet corn has to offer. When picking seed, Steve considers aspects like husk coverage, cob size, disease resistance, genetics, and sugar content. 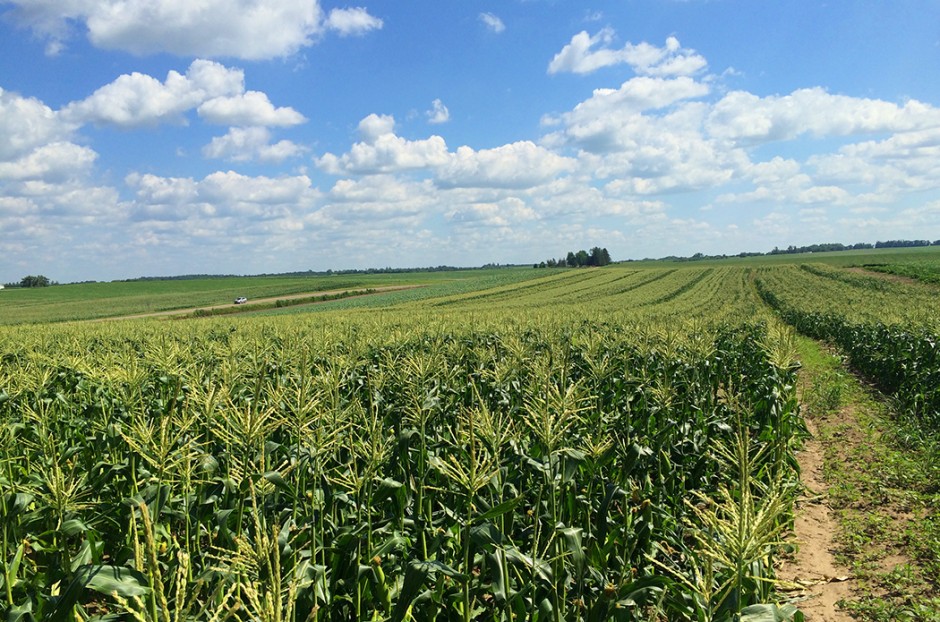 The Josephson’s grow 5 sweet corn varieties in their fields just outside Cannon Falls.

“One thing I don’t think people realize is we spend a whole lot more on our seed than maybe we have to, but the outcome is better corn,” explains Sue.

It does not take much convincing when you taste a fresh ear of Josephson’s corn. Each ear of corn is picked and inspected by hand for the utmost freshness and quality. By selling locally, the Josephson’s have developed a wonderful reputation for friendly sales staff and exceptional sweet corn. As time has passed, Sue and Steve have begun to discuss the possibility of retiring full time.

“The kids have talked, “So how much longer are you going to do sweet corn?” And right now nobody in town will let us quit!” laughs Sue.

“But I have learned so much! I don’t want to have to quit now,” admits Steve. “And it is enjoyable. I enjoy this. It’s a something that has taken me years to learn and I don’t want to quit. My dream is to find some local person who wants to continue it and I would work with them for a year or two.”

Steve pulls the husk back from a creamy yellow cob of corn. He tugs the fresh silk away from the full tender kernels.

“It is enjoyable to have a good reputation for a good product,” he smiles. 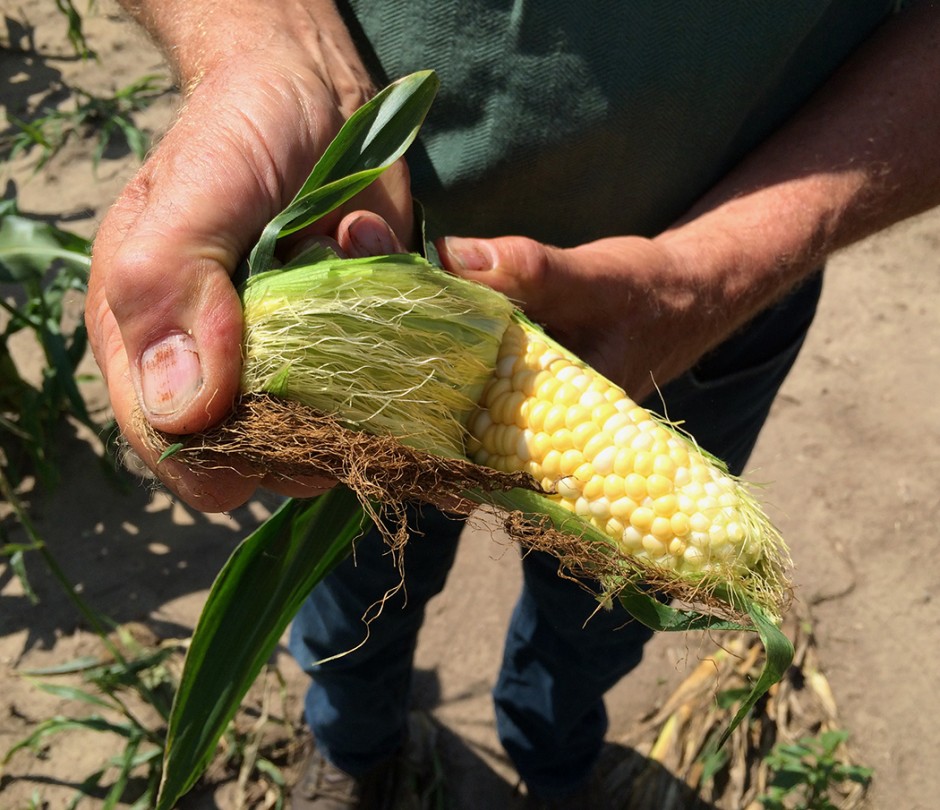