Spring Grove makes nine flavors (Cream soda not pictured) and Ferndale is proud to carry them all. Rhuberry is their newest flavor combining the summer flavors of strawberry and rhubarb.

When Bob and Dawn Hansen moved just outside the small town of Spring Grove, MN in 1983, the company Spring Grove Soda Pop was quickly approaching its 90th birthday. It would be another 20 years before they would purchase this local icon, but the soda had already made a strong impression on them.

“Whenever we would come to town… to do our grocery shopping one of us would always grab a 6 pack of soda and take it home. We always had it with us. We just thought it was a really neat thing that they had their own soda pop,” remembers Bob. “We just loved it.”

Spring Grove Soda Pop was started in 1895 by G.G. Ristey, who used cane sugar as a sweetener. The recipe for the soda has changed very little over the past 120 years and, as most soda companies moved to plastic and aluminum in the 1980s, Spring Grove Soda Pop kept their classic glass bottles. Although the soda had a dedicated following in the surrounding area, the company had struggled to expand its retail presence. 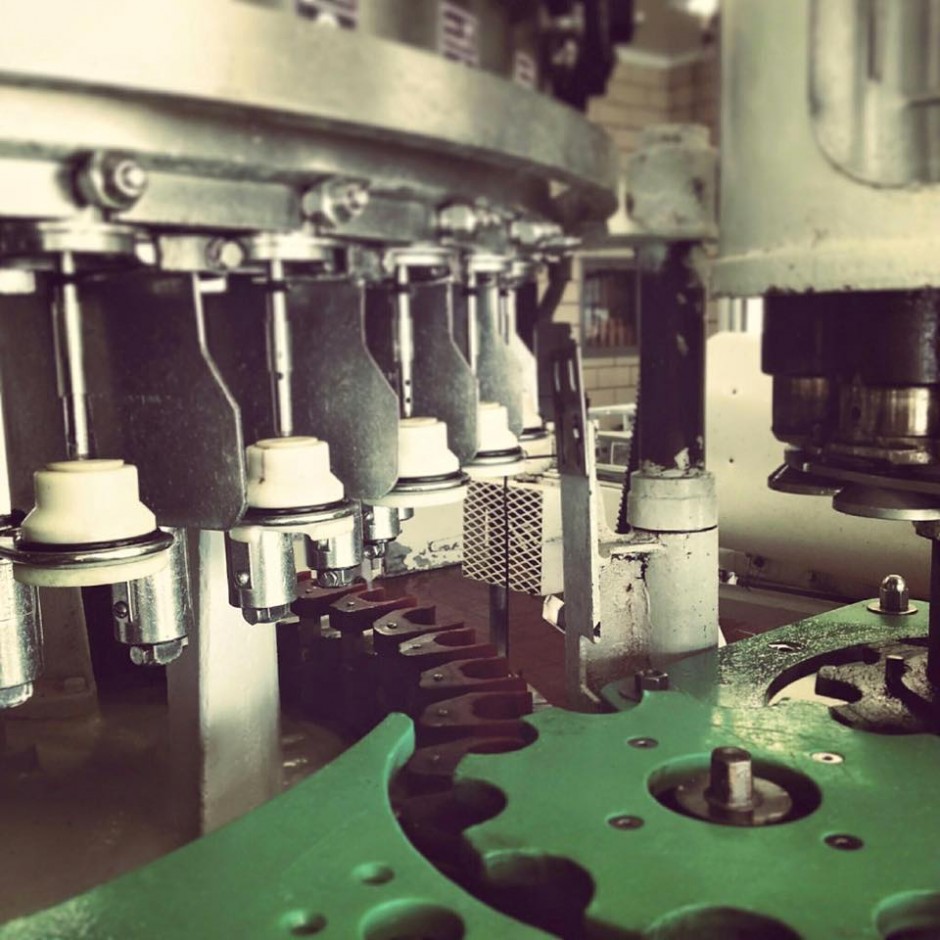 A close-up of the bottling equipment at Spring Grove Soda Pop.

When Spring Grove Soda Pop went up for sale 2001, the Hansens could not shake the feeling that they could have a real impact owning the company. “I ran a couple businesses prior to that and we wanted to get back into having our own business so we just thought we would look into it. When we looked into it, it just kept intriguing us… so we decided we were going to give it a shot,” Bob explains.

It took some time for the previous owners to finally agree to the sale. “It had been in their family since the early 50s and they were just having a really hard time selling it – the emotion of letting it go,” states Bob. “So after a year and a half they finally decided that they had to do something and they let us have it. It was a real hard decision for them to make at the time.”

When the papers were signed, Dawn left her job as a secretary for an insurance salesman and got to work on bringing the company into the modern age.

“When we took it over it was all done old school. All the bookwork was on paper legers, nothing was computerized,” Bob remembers. “She was working really hard getting everything computer organized and then trying to build up the local business from where it was…. It wasn’t something where it was just kinda handed to you.” 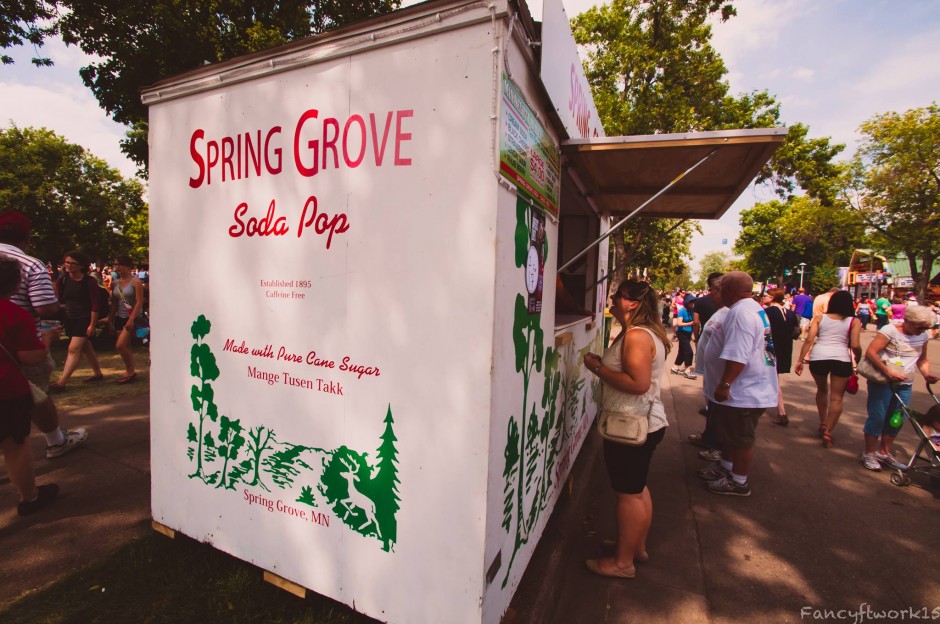 The Hansens and their staff interact with customers at the Minnesota State Fair.

Before the Hansens purchased it, Spring Grove Soda Pop had been struggling to sell 10,000 cases a year. Less than two years in, Dawn brought that number up to 16,000 cases and had found several new distributors for the soda company. Bob was doing maintenance at the factory after working as a lumber buyer for a logging company. Even with the positive growth, the initial years were tight.

“Like any business it is just a struggle to make it work,” Bob says, “I’ll never forget, Dawn said ‘I have never seen $50,000 slip through my hands so fast in my life.’ She was scared to death and we were both pretty concerned about it, but it was like, well, let’s just take the time, relax, let’s just think about what we are doing and take it nice and easy. You are not trying to recreate the wheel. You are just trying to methodically grow this business, so that is what we did.”

Slow and steady has been immensely successful for Spring Grove Soda Pop. They are now bottling 30,000 cases of soda a year. They reluctantly replaced the vintage bottling equipment in 2012 to bring in more updated machines. These allowed them to bottle more accurately, more quickly, and provided them the opportunity to bottle products for other companies.

Bob Hansen bottles soda on the updated equipment inside their facility.

“…The equipment that was in the building when we bought it was dated in the 40s. We ended up having to, very reluctantly, replace it,” points out Bob. “…We replaced it with equipment that was into this century… We got comfortable enough where we were able to bottle for other companies…it has been going real well.”

Custom bottling now makes up 60% of their business, adding around 45,000 cases to their yearly production. The custom bottling has also connected them to new distributors for Spring Grove Soda Pop.

“Now we are getting distributors in and talking to distributors that we never ever knew of before throughout the Midwest. With this one company, we are sending soda anywhere from Northern Michigan to Texas,” says Bob. “We have some distributors in Chicago that are taking it. We are sending it all over the Midwest and that was something that wasn’t possible for us before. We just didn’t have the connections to do it and now this is opening up that door.”

Even as Spring Grove Soda begins to be enjoyed throughout the country, Bob and Dawn remember the company’s roots and their connection to their small community. “The product was developed here and the history of the Spring Grove Soda is here in this community… It is a very, very nice community,” Bob explains. 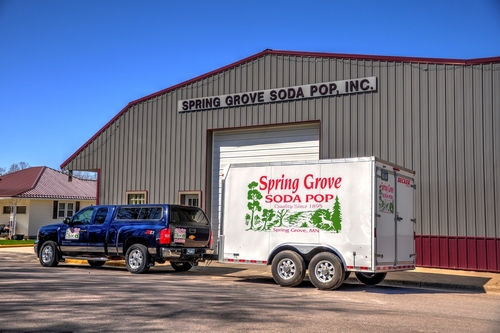 Spring Grove is still produced and bottled in the small town of Spring Grove, MN

“We are kinda in a little bit of a residential area… there are houses around us. We have semis blocking the road and people go around ‘em and you don’t hear a word from ‘em,” Bob says appreciatively. “And we start all the equipment up early in the morning and one of the neighbors just this weekend says ‘Oh you guys been working some long hours. When I get up and look up out the window at 6 am and there’s lights on over there already’…They notice it, but they are big supporters of it too. I think the community is very proud of it: of the business, of what is going on here.”

The long hours are a testament to the Hansen’s work and Spring Grove Soda Pop’s continued growth. “It just takes so long to get to where you feel comfortable and we are quite a ways from that yet… We work every day and we put in a lot of hours. Anybody can own their own business, but if you want to own it and you want it to succeed you gotta understand that you are going to work a lot of hours.… You want it to be what it can be, you are looking beyond it… We were just so happy that we got it. It’s really exciting,” smiles Bob.